The ongoing saga of Somalia’s ailing and failing government. 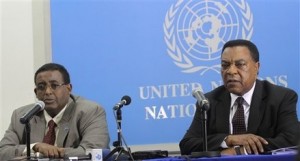 Somalia’s Prime Minister has resigned. Having ordered Prime Minister Sharmake to leave back in May, a smiling President Sheik Sharif Sheik Ahmed thanked him for his ‘courageous decision’. As an apparent advocate of counter-piracy cooperation and close ally of Puntland’s administration, the PM’s resignation could well be another hurdle for cooperation between the TFG and the regional administrations. In the short term, this manoeuvre could benefit the draft Somali constitution but continually shifting political alliances mean that a unified front is unlikely to last for long. Instability and diplomatic inflexibility assists pirate activity; if President Ahmed wants to consolidate his leadership, expand the TFG’s minimal control over the country and still engage Somaliland and Puntland, he had better choose his new cabinet wisely.