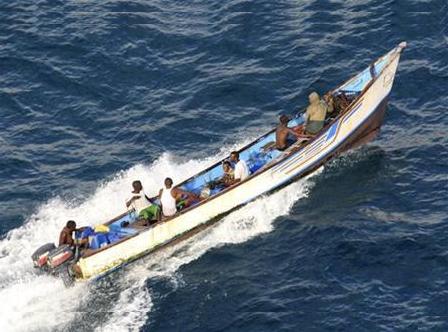 As the 20ft Skiffs raced towards the Panamanian flagged Bulker, the occupants, dressed in a ragged mix of clothing, combat trousers, t-shirts, some with flip-flops, some with odd trainers, all armed, readied their AK 47’s and one for the men fixed a belt of heavy ammunition to the large machine gun he carried.

The bulker showed no signs of awareness or concern that the men were approaching and the men in the skiff constantly watched for movement or crew on deck and the bridge wings.

As the skiff approached the bulker, and moved down the flank of the vessel, the crew came to the railings and watched the men, their presence a familiar sight in the Gulf of Aden yet, unlike other skiffs the crew had seen on their regular transits through these waters, and to the crews relief and frequent reassurance, these skiffs were not an attack from pirates, rather the bulkers security escort into the port of Berbera by the Somaliland coastguard, the maritime police force from the breakaway republic in the north west corner of Somalia.

Declaring themselves the independent Republic of Somaliland; a status that despite the total lack of international or UN recognition, has resulted in Somaliland’s 19 years of self governance, independent democratically elected leaders, their own constitution, currency and passport system. In a country that has received little or no International aid or relief support, the ability to protect your borders is essential; when you have 860 Kms of Gulf of Aden coastline, containing ruthless pirates from the neighbouring country – it’s critical.

The Somaliland coastguard was established in the first few years of the new millennium from the maritime wing of the Somaliland police service following a rise in smuggling, trafficking and piracy. Its command structure was built on Somaliland veterans of the Somali Navy. Based in the economically strategic port town of Berbera, with their coastline split into three sectors and a total of 14 Coast Guard stations located along the length of the coastline, which are manned by just under 400 Coast Guard personnel.

They are currently the only functioning and active coastguard in Somalia, despite attempts by the neighbouring state of Puntland to raise their own much needed service and the collective state governments (Somaliland, Puntland, Galmudug) and the Transitional Federal Government in Mogadishu continuing to request funding from the International Community.

Indeed, the requirement for effective measures to counter the piracy in Somalia has put Somaliland and the other Somali States at somewhat of a crossroads; having met the International Community’s requirement for joint cooperation and support for the recent UNPOS Kampala Process the progress for their development has now started to gain momentum and the relevant funding to enable the development of programmes relating to Judicial, Prisons and other linked programmes has now started. is, of course, is excellent news for Somaliland as indeed it is for the other Somali States, and places the Somaliland Coastguard in an excellent position to work with, assist and mentor the other Somali States to a high standard of training and operational effectiveness. Their current training and operational development programme, has been designed and is being implemented by Triton International Ltd, as part of their partnership contract to Train and Operationally Mentor the coastguard, improve their capability and develop their ongoing operational commitment to anti-piracy and waterborne patrolling and response, which has resulted in more than 120 pirates being captured, prosecuted and jailed in 2010 alone. The funding for the development of Somalia’s Coastal Monitoring capability will be initially limited to Land based development, due to the concern by the International Community that any vessels provided to the Somali Coastguards (including Somaliland) could be used by Pirates for their own operations. Given the current situation with Piracy in both Puntland (Eyl) and Galmudug (Hobyo & Harardhere) this may not be an unreasonable concern, however Somaliland has no indigenous Piracy, does not have suspicions of Piracy/Government links and has a proven waterborne patrolling requirement for both Coastal Defence and the protection of the Port of Berbera.

A tough job to do 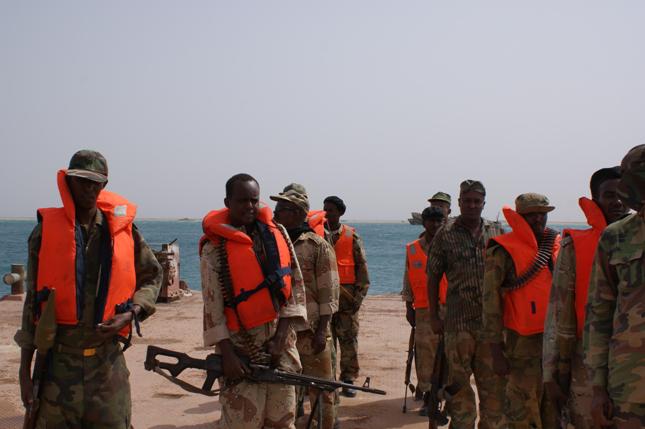 The unique situation with Somaliland derives from their 19 years of separation from the rest of Somalia, their previous colonial links to Britain (as opposed to the Colonial Italian influence in Somalia) and the independent development of their own economy and constitution. This has resulted in their commitment to Coastal Security and a very active Anti-Piracy policy, with the Coastguard as the practical enforcers; indeed the recent incidents of the Coastguard interdiction of Pirates as they either transit through Somaliland Territorial Waters to conduct attacks or as they are returning towards Puntland waters, has led to exchanges of fire and the denial of access to Pirates intent on using Somaliland Coastal towns in the disputed region of Saanag to hold captured Vessels, whilst negotiating ransom payment.

The Coastguard’s main Headquarters are located in Berbera, next to the Ministry of Finance & Customs building, adjacent to the Port complex and the hub of the shipping trade in Somaliland. The Port is both ISPS Code Compliant and maintains a strong working relationship with the Coastguard and their partners Triton. The Port’s primary business is Livestock import and export, with Container, wet and dry cargo and general white goods movement, for Somaliland and Ethiopia, ensuring the Port never rests.

The World Food programme has now started to deliver Aid through Berbera for Ethiopia, Somaliland, Puntland and Central Somalia. This has helped to maintain the flow of aid to the region and takes significant pressure off Djibouti, as the main point of delivery. Currently, the delivery of WFP Food Aid to Puntland has been marred by the recent kidnapping of five truck drivers of delivery convoys, by Puntland Pirates and the theft of the Aid Cargo. Negotiations with the Pirates by Local Elders and the Families have so far yielded little success in securing their release.

In order to maintain their capability, the Coastguard operates a number of small fast patrol boats, which have Deck Mounted Vladimirov KPV Heavy Machine Guns, which fire 14.5x114mm BZT – Armour-piercing incendiary tracer full metal jacket round with a steel core. These are used for inshore and coastal patrols and the pursuit of Pirates. The maintenance of discipline and operational training is a key component to the coastguards effectiveness and the development of a 12 week basic training course, with further specialised training modules for communications, medical, maritime law, observation & monitoring, tactical maritime operations, vessel maintenance and leadership, will ensure this continues. 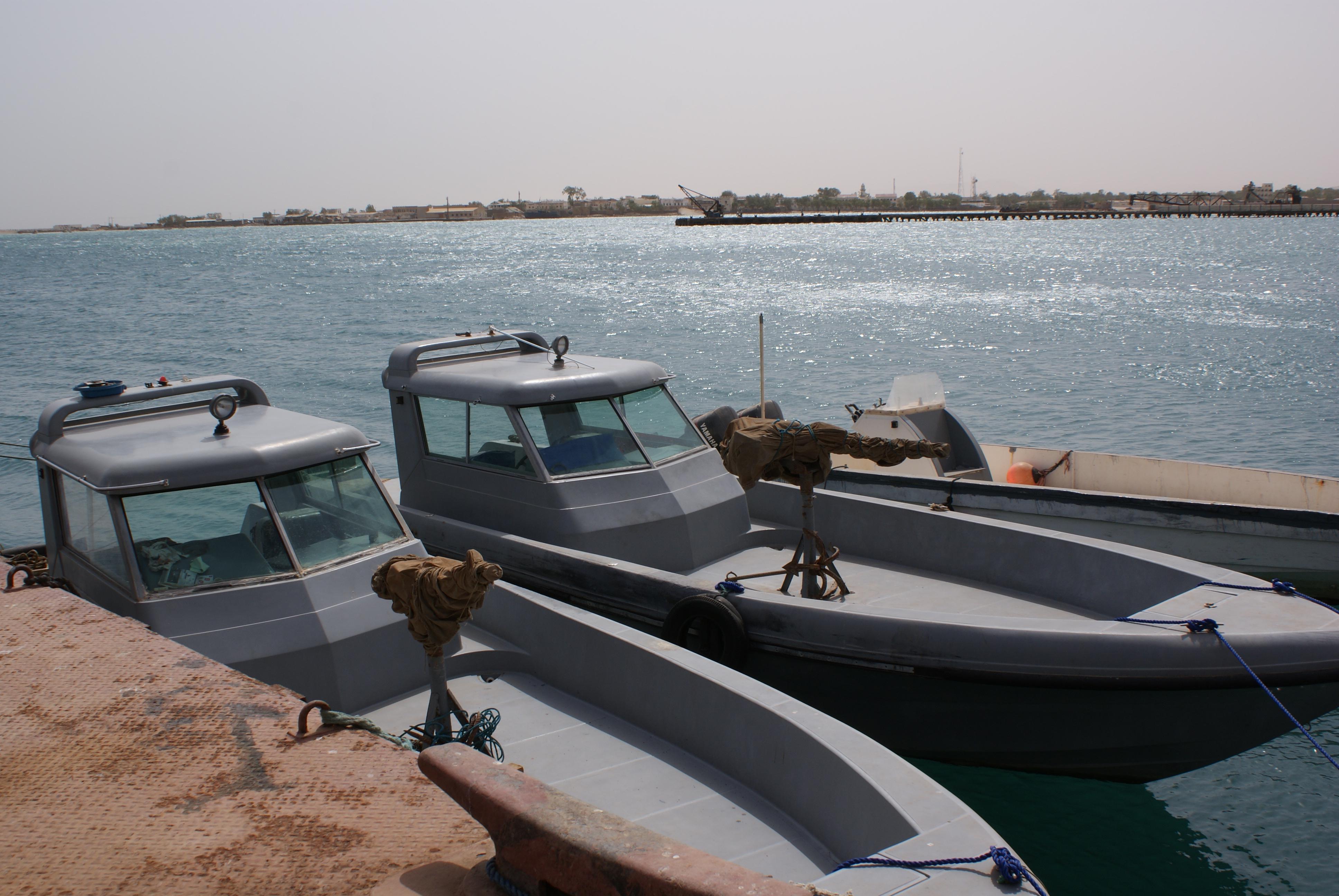 Full implementation of these courses remains dependent on the availability of funding to develop the coastguard capability. Given the increasing concern of the current land based Somali terrorists (Al Shabaab; Hizbol Islam and elements of Al Qaeda) utilising the maritime domain for resupply, manning and attacks, increased impetus is required to ensure the coastguard can be trained and equipped to counter such an increasing threat, in addition to the range of piracy, smuggling and illegal activities it currently combats.

At a time where millions of dollars are spent daily on maintaining an international naval presence in the Gulf of Aden and the Indian Ocean and the international community seek solutions for the support and engagement of legittimate Somali governance, Somaliland continues to remain isolated and unrecognised in its status or the legittimate contribution it continues to make towards the reduction of piracy and the prevention of maritime terrorism. Less than three naval vessels have visited the port of Berbera and despite frequent liaison and cooperation attempts, no Somaliland Coastguard is working aboard any naval vessel as a liaison, or linguist/interpreter. Nor are the Coastguard Law Enforcement Officers used to assistance with the arrest and communication with Pirates, the preservation of evidence, statement collation or intelligence recovery/collation.

All these requirements can be provided by a trained Somaliland Coastguard. The partnership with Triton has generated a definitive Training Development and Operational Mentoring programme, which, if supported, can not only improve the coastguard, but is strategically placed to significantly contribute towards the instigation of a Somali-wide Coastal Monitoring Force that could be a key asset in the reduction and possibly, removal of Piracy from the waters around Somalia.

Previous ArticleSomalia Onshore: Where next for the transitional government, al-Shabab and the pirate industry?
Next ArticleAnglo-American Support for Somali Coast Guard, Strategic Pragmatism or Problem?

3 Replies to “Skulls and Crossroads”