Campaigners say cruise liners are destroying Venice’s historic ambience and have taken to organising protests both onshore and on the water.

At one moment the scene is everything you expect of Venice; medieval churches, domes and bell towers, and water sparkling in the canal in front of you. But quite suddenly, this picture can be dramatically and controversially transformed.

Way up high on its rails, some of its thousands of passengers look down on the palaces and piazzas.

As it passes slowly down the canal, this very modern, floating resort completely dominates the scene, dwarfing the ancient city.

At the height of the season, these giants emerging from the sea one after another can bring as many as 30,000 visitors in a single day.

Some resident Venetians bitterly oppose this. And over the past several months they have stepped up their campaign against the big ships.

Back in April, they mounted a protest: taking to the water in dinghies and motor boats and swarming around one of the vast vessels, blaring klaxons and hooters.

“You are too big!” shouted one activist, bellowing up at the ship on bullhorn.

For the activists the vessels are emblematic of an industry that is overwhelming their home town.

The row about the ships goes to the heart of the controversy over quite how much Venice should give itself over to tourism.

New legislation is being considered that could bring change.

“I can’t stand the cruise ship business,” said Silvio Testa, a spokesman for the campaign.

“It’s the most evident demonstration of the vulgar exploitation of my city.

“The beauty of Venice is undoubted. But the city pays for it like a prostitute that is too beautiful.

“To see that the sophisticated city of my childhood has become Disneyland, full of bad quality souvenirs, makes me sick in the stomach.

“And these ships are the representation of the nightmare that Venice is living through.”

A spokeswoman for the Venetian branch of the conservation group, Italia Nostra, reinforced that view.

“It’s as if Venice, for most people, is an asset that has to be exploited,” she said.

“A cash cow to be milked until there’s nothing left.”

The campaigners object to the ships on aesthetic grounds, seeing them as intruders from the modern world that repeatedly shatter the city’s historic ambience.

Mr Testa says not only do they bring too many visitors, and pollute Venice’s atmosphere, but he also fears that over time the wash they create may damage the buildings that line the canals. 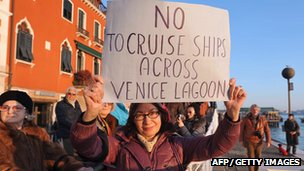 But the managing director of the port where the ships dock, Roberto Perocchio, rejects all this.

He points out that the liners take just minutes to pass any point in the city. Any impact on its famous vistas is fleeting.

With regard to air pollution caused, Mr Perocchio said the vessels operate within European Union regulations. There are also plans to reduce emissions further.

And Mr Perocchio insisted the ships do no harm to the foundations of Venice’s villas.

“Of course everything has been carefully inspected starting from 2003 and 2004 in order to be sure the water movement – the very slow and soft water movement produced by the ships passing by – would have the same intensity as the natural tide of the lagoon of Venice,” Mr Perocchio said.

The industry says its passengers contribute 20% to the business that the city turns over from its 20 million visitors a year.

And the cruise business accounts directly for some 3,000 jobs.

Mr Perocchio says this major contribution to the local economy is something to celebrate.

“The city has lived very poor times in the early ’50s and ’60s, and I would say that the majority of Venetians are proud of this economy”

He maintains that Venice’s conservationists are in danger of “paralysing” the city – locking it in the past.

And, while the argument goes on, the ships keep steaming in.

Their passengers help to swell the numbers of tourists who pour through the alleyways and gather in large and noisy crowds in St Mark’s Square.

But it is possible that some change may come. 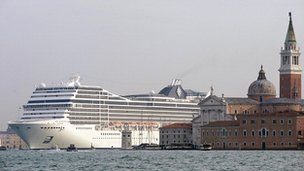 An Italian parliamentary committee on environmental matters is looking at legislation that could hand the city more control over the management of its waters.

Exactly what impact this would have is not yet clear. But it might at some point lead to larger ships being ordered out of the channels that enable them to navigate through the city.

Among the various long term proposals are suggestions that facilities be created that would enable the cruise ships to dock not in Venice itself, but elsewhere nearby.

If anything like this were to happen, it would likely take several years to come about.

But the campaigners are determined that the sight of the great ships inching their way between the splendours of Venice will, eventually, become a thing of the past.