The 7,400 tonne attack submarine left the site in Barrow-in-Furness on Saturday 15 September for Her Majesty’s Naval Base (HMNB) Clyde, Faslane, which will become its operational base.

This major milestone in the submarine programme is the point at which Ambush will begin to test its range of capabilities, under the control of Ambush Commanding Officer, Commander Peter Green and his crew. 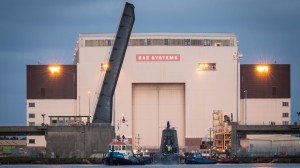 In the twilight hours of an autumnal morning, Ambush prepared to depart Devonshire Dock in Barrow. She moved through the dock system flanked by tug boats and waved off by hundreds of well wishers from the local community as she set sail for Her Majesty’s Naval Base in Faslane, Scotland.

Moving under her own power she left the docks at around 11:30am into open water to begin her sea trials with the Royal Navy who will be her custodian for the next 30 years. 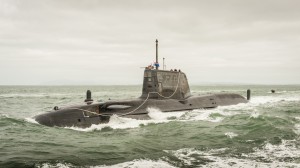 Ambush heads for sea trials under her own power.

Over the next year she will be put through her paces in a rigorous testing programme and regime of inspections, certification and assessment to prove she is ready for operational deployment.

Once commissioned into the Royal Navy she will become known as HMS Ambush and fly the white ensign for the first time as a fully commissioned warship.

Previous ArticleChina’s first aircraft carrier
Next ArticleSecurity for a Fee