The Abu Dhabi Star is the latest ship to have been attacked in the Gulf of Guinea in recent weeks, highlighting a growing threat in the region.

Surviving the pirates off the coast of Nigeria
By Will Ross, BBC

The Abu Dhabi Star is the latest ship to have been attacked in the Gulf of Guinea in recent weeks, highlighting a growing threat in the region.

A total of 40 attacks have been reported this year – many others are hushed up.

News that the vessel was carrying petrol from Nigeria to the US has also raised eyebrows. Nigeria is a major exporter of crude oil but generally imports its refined fuel products.

Some of the 23 crew described the terrifying moment when, in the darkness, they realised the pirates were approaching.

“Our radar picked up four unlit boats. They were much bigger than the standard boats here. They had twin engines and approached very fast. They were on both sides of the ship and each boat had about five well-armed people on board,” Capt Aron Chandran told the BBC.

“Within five minutes, one or two of them were on board, fully armed and in full combat battle dress.” 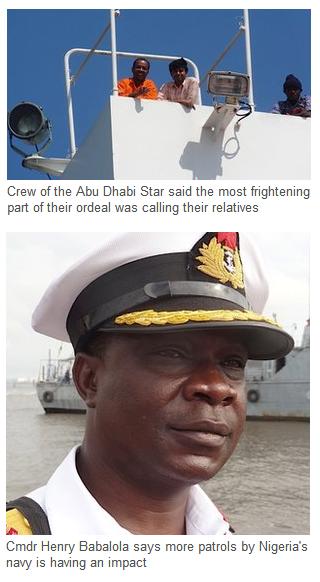 The crew had been trained for such a scenario and they all locked themselves in a safe room, known as a citadel, out of reach of the gang.he crew had bee

The pirates smashed the glass windows to get access to the bridge in an effort to take control of the 183m (600ft) -long vessel.

“I think they are professional. They knew what to do. They started reducing the speed of the engines and then stopped them,” said Capt Chandran.

“With the communication equipment and the satellite they knew exactly what to break and what to disable.”

Out of sight of the pirates, some of the crew then climbed up to the funnel deck where they could get a mobile phone signal. After the call for help, it was a long and anxious wait.

“It was very disturbing. We knew what to do but mentally we were very, very disturbed,” chief engineer Rajbir Dhankhar recalled.

“From the funnel, the captain and I were monitoring the situation as we didn’t want a collision or pollution so we were watching to ensure there was no accident. We still had control of the engines and the steering so we could manoeuvre a little bit,” he said.

Throughout the ordeal they would have been aware that during previous attacks in the Gulf of Guinea crews have often been treated violently.

Unlike piracy off the coast of Somalia, where the seafarers are used as bargaining chips to secure a hefty ransom, in this region the gangs are after the cargo and so the welfare of the crew is of little consequence to the pirates.

The crew of the Abu Dhabi Star noticed that the manifold was open so suspected that the cargo was being offloaded.

“At around 11 o’clock in the morning – almost 12 hours after the attack – a naval helicopter started circling the ship,” the captain said. But by that time, the pirates had already left, some two or three hours earlier.

The Nigerian navy had initially said its intervention had prompted the pirates to flee the scene. Even though the pirates had long gone, the crew were nevertheless grateful when the help came.

News of the hijacking had spread around the world. Once safe, the crew called home to calm down some very worried relatives back in India.

“That was the worst part. I rang my wife and my mother. I have a baby girl so it was a very tough moment for me. Everybody asked us to come back as soon as possible but in this job that is not possible. I’ll be away at least another one or two months,” the captain said.

This attack was relatively close to shore and will alarm other ship owners and crews in the region. The International Maritime Bureau said the tanker was attacked 12 nautical miles from Lagos. The Nigerian navy said it happened further out to sea and that the tanker had then drifted towards the coast.

The vessel’s operator, the Dubai-based Pioneer Ship Management Services, reported that a cargo of petrol was loaded in Nigeria and was being moved to the US and Europe.

The gang that hijacked the Abu Dhabi Star may still be free but naval officials say ongoing patrols by the navies of Nigeria and Benin are having an impact.

“Before Operation Prosperity, the Nigeria-Benin corridor was becoming extremely notorious. But the presence of the naval ships has reduced the crime significantly,” Cmdr Henry Babalola, of the Nigerian navy, told the BBC.

“We are thinking of widening the scope of Operation Prosperity. We want the navies of Togo and Ghana if possible to join,” he said, adding that in some cases the crew themselves are in on the crime and tip off the pirates.

There have been calls for tougher action against the pirate gangs.

“We feel it is very important that the littoral countries take strong action against these criminals as soon as possible before the situation gets out of control,” said Pottengal Mukandan, the director of the International Maritime Bureau (IMB).

Although these types of attacks began in early 2011 they have increased in recent months. Experts suggest the pirates have become more organised deploying at least one “mother ship” from which attacks can be launched across the Gulf of Guinea.

“Once people get the idea that a lot of money can be made they want to get involved,” said Peter Sharwood-Smith, West Africa regional manager for the risk consultants Drum Cussac. It has recorded nine incidents during the last three months where tankers were targeted off the Togolese port of Lome and Lagos.

It is possible that the piracy is in some way linked to events in the Niger Delta and could have drawn in youth from there. After years of violence, the oil-rich region is experiencing relative peace thanks to a 2009 amnesty that offered salaries and training for thousands of ex-militants.

“There is a new generation of young people in the Niger Delta coming of age now. They were too young to be part of the amnesty so they are not receiving any payment or training,” Mr Sharwood-Smith said, adding that job prospects in the Delta are no brighter today than when the militants took up arms in the early 2000s.

The attacks on a fuel-carrying vessel in the region appear to be getting increasingly brazen.

On 28 August, pirates seized a Greek-owned tanker within Togolese territorial waters. While they were off-loading 3,000 tonnes of fuel onto barges, an anti-piracy conference was taking place in the Togolese capital, Lome.

Provided the will is there, however, it ought to be possible to stamp out the piracy.

“Unlike Somalia, where there is no national police force, these countries all have functioning governments, police and navies. This is a law enforcement problem,” said IMB’s Mr Mukandan.

Seeing as Nigeria’s notoriously corrupt, crime-ridden fuel sector is intertwined with the piracy, securing the sea may not happen any time soon.

Efforts to clean up the oil sector have failed largely because as long as the status quo continues, people with the right connections have been able to fill up their bank accounts.