During this the past year, CTF Sentinel has provided over watch for more than 1,100 partner nation flagged merchant vessels as they transited the Strait of Hormuz and the Bab el-Mandeb Strait. The task force has made almost 10,000 maritime awareness calls to reassure merchant vessels of task force presence. 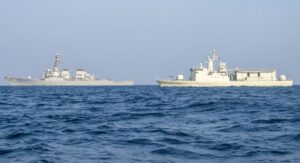 Sentinels and Sentries have also spent over 28,000 hours on station supporting the CTF Sentinel mission. Maritime patrol and reconnaissance aircraft flew more than 13,000 flight hours to providing surveillance during these missions.

Opening its first command center on Nov. 7, 2019, CTF Sentinel was created under the International Maritime Security Construct’s (IMSC) mission to protect international commerce by safeguarding freedom of navigation from the Arabian Gulf, through the Strait of Hormuz and the Bab el Mandeb Strait, to the Southern Red Sea.

In July 2019, IMSC began as a coalition of only three nations: the United Kingdom, Australia and the United States. Bahrain joined soon after in August. In September, Saudi Arabia and the United Arab Emirates joined and, by November, Albania was a member of the growing coalition.

“The speed at which this coalition was formed is a testament to the internationally shared interest in safeguarding global commerce from malign actors,” said Vice Adm. Samuel Paparo, commander of U.S. Naval Forces Central Command, U.S. 5th Fleet and Combined Maritime Forces. “These nations came together to maintain vigilance over the maritime and expose those who would disrupt trade through aggression.”

Under the initial leadership of the U.S. Navy’s Rear Adm. Alvin Holsey, the task force rapidly set up its expeditionary headquarters at NSA Bahrain where partner nations could manage coalition assets.

These include Sentinels and Sentries. Sentinels, large naval vessels such as frigates and destroyers, provide over watch of two critical choke points at the Strait of Hormuz and the Bab el-Mandeb Strait. Sentries, smaller naval vessels such as patrol craft and corvettes, coordinate to patrol key transit lanes between the choke points. Additionally, airborne surveillance assets are employed to monitor the flow of traffic through the highest risk areas.

On Jan. 30, 2020, Commodore James Parkin became the first Royal Navy commodore to assume command. The coalition integration grew under his command, which is evident by the inclusion of the Australian frigate HMAS Toowoomba in the Sentinel mission in March, and a visit by Bahrain’s Crown Prince, His Royal Highness Prince Salman bin Hamad Al-Khalifa in March.

“The establishment of the IMSC was a natural progression as new challenges arise in the area,” said Rear Admiral Mohamed Yousif Al-Asam, Royal Bahrain Naval Force (RBNF). “The RBNF has dedicated several naval units to enable the IMSC Commander to successfully carry out its mission. This construct has created a streamlined approach to the protection of maritime sea lanes and strategic passage ways.”

“As evidenced by the commitment of highly trained watch standers from our partner nations and powerful assets like HMS Montrose, USS John Paul Jones, USS Stout, HMAS Toowoomba, RBNS Al Muharraq, HMS Tabuk, and the Al Mubarraz, there is no doubt about the credibility of deterrence our task force brings against any threat to the stability of this essential region,” said Bellfield.

On August 6, CTF Sentinel moved from its expeditionary headquarters into a permanent headquarters building, specifically designed to facilitate the coalition’s mission and enhance the flow of information, allowing for greater coordination in tracking merchant shipping as it transits through key waterways.

Of particular note, on Aug. 13, a Sentinel ship captured the moment Iran used military force to conduct an armed boarding of the M/T Wila, a non-IMSC flagged vessel, in international waters. This was a blatant violation of international law that undermined the free flow of commerce. The exposure of this incident demonstrated CTF Sentinel’s commitment to the merchant community and resulted in the deterrence of further state-sponsored malign activity.

In fact, during the past year, there has been a significant reduction in state-sponsored malign activity in CTF Sentinel’s area of operations. “Since the inception of the IMSC there have been no attacks on IMSC flagged vessels. Mission success!” said Bellfield.

The task force also made significant strides in engagement with the merchant community during this time, including the CTF Sentinel Maritime Trade Operation section liaising with the merchant industry through conferences, regular meetings with industry bodies and coordination with the United Kingdom Maritime Trade Organization (UKMTO) and U.S. Naval Cooperation and Guidance for Shipping (NCAGS). These efforts, combined with the continuous assessment of industry data, have built CTF Sentinel’s maritime domain awareness and strong relationship with commercial shipping.

“Our efforts to support mariners have included the creation of IMSC Bridge Reference Cards, available through the Maritime Global Security website and provide recommended actions in response to a number of malign activity situations,” said Pugsley.

CTF Sentinel also communicates to industry through the ‘Sentinel Watch,’ a monthly newsletter which provides a summary of security updates and events, and includes guidance on security incident reporting.

In September, CTF Sentinel built upon its close ties with the merchant community by holding its bi-annual Stakeholders Conference to inform maritime industry professionals about regional security, task force capabilities and task force operations, as well as the future of the Sentinel mission.

On Oct. 27, the Republic of Estonia became the ninth member of IMSC signifying further international commitment to the security of these vital waterways.

The next CTF Sentinel change of command is scheduled for Nov. 19, when Commodore Craig Wood, Royal Navy, will assume command.

Coalition Task Force Sentinel continues to safeguard freedom of navigation and the free flow of commerce, and reassure merchant shipping by deterring and exposing state-sponsored malign activity that threatens security of the maritime commons in the Arabian Gulf, Gulf of Oman, Arabian Sea, Gulf of Aden and the Southern Red Sea.