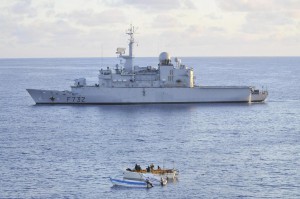 The decision was taken in the context of the holistic and coordinated strategic review of CSDP engagement in Somalia and the Horn of Africa, with the aim to consolidate and strengthen the EU’s response to evolving security context and enhance its role as a security provider.

Capitalising on the successes of suppressing piracy off the coast Somalia, the mandate of Operation ATALANTA was expanded to some secondary executive tasks of countering trafficking of weapons and narcotic drugs, and non-executive tasks of monitoring illegal activities at sea. With this mandate, Operation ATALANTA will contribute to the implementation of the UN arms embargo on Somalia and will support the ongoing fight against Al Shabaab and its funding streams. These adjustments also complement ATALANTA’s core effort to deter, prevent and repress piracy and armed robbery at sea off the coast of Somalia, in order to ensure the freedom of navigation and the protection of World Food Programme and other vulnerable shipping to Somalia. The expansion of Operation’s tasks and its geographical scope allows the EU to further build the wider regional maritime security architecture stretching now from the Red Sea through Bab el Mandeb to the Western Indian Ocean.

In Somalia, the EU’s CSDP action was extended to support the build-up of Somali Security Forces and institutions, in view of a gradual takeover of security responsibilities from the African Union Mission in Somalia (AMISOM), in line with the revised Somali Transition Plan. With the renewed mandates, EUCAP Somalia and EUTM Somalia will support the development of Somali capacities and capabilities through strategic advice, mentoring and training, accompanied by the EU-funded equipment support. The two missions will continue to support the build-up of democratic, sustainable and accountable Somali security institutions and forces, acting under the rule of law and civilian oversight.

Ensuring the link of the EU’s CSDP action on and off shore, EUCAP Somalia will sustain its support to the strengthening of the Somali maritime law enforcement capacity at federal and regional levels in Somaliland and Puntland. The mission will also assist Somalia in strengthening police capacity, including developing the Federal Darwish and strengthening INTERPOL National Central Bureau in Mogadishu.

While sustaining the three pillar approach of advice, mentoring and training, EUTM Somalia will refocus its training output on the enabling functions, which are vital for the gradual transition of AMISOM. The mission will further consolidate the efforts in developing a functional and effective Somali-owned Training System that provides the Somali National Army with the policies, procedures, expertise and experience to manage their own force generation. EUTM Somalia will also aim to establish a “Knowledge management” mechanism to be able to better monitor the performance of EUTM- trained units.

Since its establishment in late 2008 in response to the rising levels of piracy in the Western Indian Ocean, Operation ATALANTA has contributed significantly to the suppression of piracy, as well as the protection of the vessels of the World Food Programme (WFP), African Union Mission in Somalia (AMISOM) and other vulnerable shipping. The Operation deters, prevents and represses acts of piracy and armed robbery at sea thus reducing the threat to the international maritime community. Additionally, the Operation has monitored the fishing activities off the coast of Somalia and supported other EU CSDP missions and international organizations working to strengthen maritime security and capacity in the region.

The EU Operation Headquarters is located at Rota, Spain and the Maritime Security Centre Horn of Africa (MSCHOA) is located at Brest, France. The Operation Commander is Major General Antonio Planells Palau.

Launched in July 2012 as EUCAP Nestor, EUCAP Somalia contributes to the establishment and capacity building of maritime civilian law enforcement capability in Somalia, including Somaliland.

EUCAP Somalia enhances the country’s maritime civilian law enforcement capacity by supporting federal and regional authorities in developing legislation, strengthening the criminal justice chain in the maritime domain and providing advice on policy to the Somali ministry of internal security and the Somali Police Force. The Mission supports the development of coast guard and maritime police functions in and around the main Somali ports, and implements additional assistance to broader police development.

The Mission Headquarters is currently located in Mogadishu and is led by Head of Mission Mr. Chris Reynolds

EUTM Somalia implements its mandate utilizing a three pillar approach that focuses on training, mentoring and the provision of strategic advice to the Somali National Army (SNA). With this latest renewal, EUTM Somalia enters its 7th mandate since it was launched in April 2010. Throughout the years, the EU training mission has expanded its tasks and sets out to support the internal development of a Somali‐owned training system.

“The Military Planning and Conduct Capability (MPCC) is responsible at the Strategic Level for the operational planning and implementation of this mission. The current Mission Force Commander is Brigadier General Fabiano ZINZONE.”