Drivers for Change in US Counter-Piracy Strategy 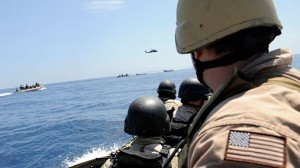 US strategists agree that Piracy off the coast of Somalia is an ever-shifting ball game. A recent US Government Accountability Office report into US initiatives in countering piracy has identified that existing plans, devised back in 2008, need updating. Amongst its various  recommendations, the GAO report advocates greater interagency cooperation, the disruption of pirate revenue and the facilitation of pirate prosecution.

As John Vandiver illustrates in his article: GAO report recommends new counter piracy plan “the U.S. government is not systematically tracking the costs or effectiveness of its counterpiracy activities off the coast of Somalia.” The GAO report identifies that a better understanding of the costs and benefits of existing operations is required, which, when implemented, is highly likely to have an impact on the US-led Combined Maritime Forces Task Force 151.

Continuing at the strategic level, in the article:  A Subtle, But Significant, Shift in U.S. Somali Policy Opens the Door to Realism Peter Pham discusses the US Assistant Secretary of State for African Affairs’  address to the UN General Assembly on 24 Sep. Ambassador Carson indicated a shift away from a  purely single-track approach of US support for the Transnational Federal Government towards a two-track approach of engagement with Somaliland and Puntland.

The US Government does not formally recognise any entity as the government of Somalia, but adheres to the African Union’s position on a unified Somali state. Whilst the US has supported the TFG in the past, an embrace of realism through engagement with the better functioning elements of governance in the Somali state, if handled correctly, may deliver better results. As Dr Pham argues, a top-down approach to Somalia’s reconstruction has been attempted and failed, whilst a bottom-up approach is likelier to achieve the desired outcomes. Outcomes which include the suppression of piracy.