In the AFP article “Send troops not navies to Somalia, says Uganda” James Mugume, permanent secretary at Uganda’s foreign ministry commented that the international counter-piracy missions offshore were “a good reaction, but unsuccessful.” Mr Mugume contended that strengthening the African Union (AU) force on land would not only be cheaper, but more effective than the naval counter piracy  operations offshore and reiterated the request made earlier this year “to give the AU force a more robust mandate and support its expansion to 20,000 men.” 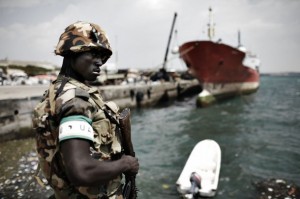 “The concept of operation we presented to the Security Council is: let’s take over the territory of Somalia. Let’s block the ports … and the issue of piracy will automatically be reduced” claimed Mr Mugume.

Certainly this follows the wise adage that maritime piracy comes from the land and it ends on land but unfortunately for the AU and Transitional Federal Government (TFG) to take over the territory as he suggests above, they would probably need five times the number of requested troops, and a whole bag of other tricks. Why? I’ll explain.

The African Union forces in Somalia are currently attempting to fight an insurgency, in spite of a mandate that would appear otherwise. The vast majority of the current 7,500-strong AU force is bogged down in fighting for control of Mogadishu. These troops are augmented by around 6000-10,000 TFG troops and affiliated forces of varying quality, affiliation and motivation with the largest, Ahlu Sunna wa al Jama’a (who are largely based in Galgudud), at 2500. 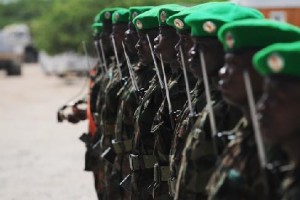 Even with an increase of AU forces to 20,000 the maximum total estimate of pro-TFG forces sits at approximately 32,500 troops. Yet still, this figure disregards the large proportion of AU and TFG forces in supporting roles that are not even directly engaged in combat operations. If we remove those troops that are at the tail end rather than the teeth, this figure is reduced by half.

Without censuses for two decades, any accurate estimates of Somalia’s population are extremely difficult. However, a rough average between the World Bank, CIA and UNDP comes to a current estimation of around 5 million inhabitants for south-central Somalia, disregarding that of Puntland and Somaliland.

As advocated by the 2006 US’ counterinsurgency manual and repeated ad nauseam elsewhere, if we consider the ‘magic’ counterinsurgency ratio of a minimum of 1 soldier per 50 civilian inhabitants, even with an increase in AU troops to 20,000 the combined pro-TFG forces possess only one fifth of the minimum amount of 100,000 troops necessary to conduct effective counter-insurgency operations. It therefore seems unlikely that an increase of AU forces to 20,000 would necessarily extend TFG control much further than the capital. 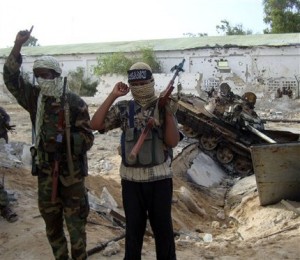 100,000 AU troops? The ratio may be beneficial but it is certainly unrealistic, as argues David Kilcullen, a senior counter-insurgency adviser who formerly worked on the surge with Gen. Petraeus in Iraq and currently works for the US State Department. In his 2009 book, ‘The Accidental Guerrilla’ Dr Kilcullen advocates that several critical factors are necessary for effective counter-insurgency operations aside from force quantity and density, namely the following:

1. A political strategy that builds government effectiveness and legitimacy while marginalizing insurgents, winning over their sympathizers and co-opting local allies;

2. A comprehensive approach that closely integrates civil and military efforts, based on a common diagnosis of the situation and a solid long-term commitment to the campaign;

3. Continuity of key personnel and policies, with sufficient authority and resources to do the job;

5. Cueing and synchronization of development, governance and security efforts, building them in a simultaneous, coordinated way that supports the political strategy;

6. Close and genuine partnerships that put the host nation government in the lead and builds self-reliant, independently functioning institutions over time;

7. Strong emphasis by coalition forces on building effective and legitimate local security forces, balanced by a willingness to close with the enemy in direct combat while these forces are built; and 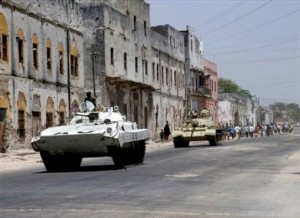 Unfortunately many of the factors outlined above are currently lacking in the AU and TFG’s stalwart efforts, not least due to the fact that they are primarily preoccupied with increasing security in Mogadishu. The African Union is comprised of many African states that have their own concerns of regions with secessionist ambitions and therefore the AU understandably supports the TFG as the legitimate government of Somalia. Unfortunately the support of the TFG has been costly and has so far produced few results, encouraging some parts of the international community, including the US, to shift towards increasing engagement with those areas that have more effective governance; Puntland and Somaliland.

The fundamental threat to the TFG’s security stems not from pirates, but Al-Shebaab, Hizb-Al-Islam and other Wahhabist-influenced Islamic militias that are conducting an insurgency and creating their own areas of governance. Control of Mogadishu may give the fragile government room to breathe and to potentially conduct initiatives beyond the capital, but, without a massive and unrealistic increase in troop numbers and the establishment of many of the critical factors outlined above it’s difficult to see how the AU-supported TFG would re-take regions under control of the Islamist militias, 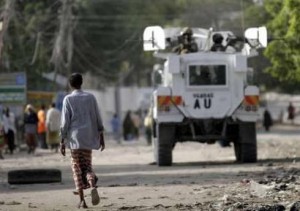 It may come from the land and end on land,  but piracy is not high on the list of problems on land.

Previous ArticleSailing Through the Pirate Zone
Next ArticleSomalia Onshore: Where next for the transitional government, al-Shabab and the pirate industry?