Signing On: The International Code of Conduct for Private Security Contractors 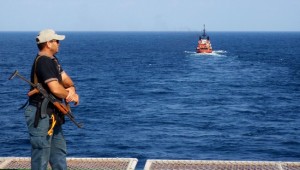 Representatives of Governments, NGOs, and the security industry gathered in Geneva this week to sign a new International Code of Conduct for Private Security Contractors, and to put in place new systems of formal governance.

This pledge on behalf of the security industry is set to dramatically change, and hopefully improve, the provision of private security on a global basis. Making a real difference in providing oversight and reassurance for clients, while creating a professional framework for an industry which has long been struggling to gain and maintain a positive image and presence.

The International Code is the product of many years labour by the Swiss Government’s Department of Foreign Affairs, the Geneva Centre for the Democratic Control of Armed Forces (DCAF), and some of the biggest names in security. It provides scope for the private security community (both on land and sea) to put its name to some fairly fundamental tenets – providing the basis of an important mission statement for those who undertake challenging roles in the world’s danger zones.

Amongst the articles of the code are a range of general commitments that Private Security Companies (PSCs) will be bound by. These include basic concepts of conduct, as well as clear and unequivocal commitments to guard against illegal and unsafe operations.

Under the code, PSCs have agreed to minimum standards in recruitment, vetting personnel, and training. They have also agreed that their personnel cannot invoke contractual obligations, orders from superiors or “exceptional circumstances” to engage in torture, or other forms of abuse. The Code presses companies to limit their use of firearms to self-defence, and to uphold the human rights of those affected by their presence.

While there was a land based perspective taken throughout the development of the Code, there is increasing scope for the provisions to be applied in a maritime context, with attention turning to the role of private security in policing the troublesome shipping lanes off Somalia. As the global naval flotillas are gradually withdrawn, private security has to be in a fit shape to step into the void.

As the maritime theatre swells with a seemingly ever growing array of new companies, it is important for Governments, Armed Forces, Ship owners, the maritime industry and the wider public to have a clear and explicit indicator of who they can trust. With this new Code there is now a means of differentiating the quality providers, and of forcing positive change and development across the industry. This provides a clear, defined standard to attain or work toward, and offers an unambiguous means of identifying high quality, viable security companies.

While there has been pride in those spearheading the Codes’ creation, and an acceptance across the wider security industry, the concept has not been without its critics. There are some who see it simply as a “window dressing”, distracting from the real need for a legally binding treaty on the control of PSCs.

From the maritime perspective it is positive that some companies have already signed up, and the Security Association for the Maritime Industry (SAMI) has also voiced its support in a pan-industry statement. However, there is still concern that the Code will not have the desired effect unless clients (shipowners) are made fully aware of the positive impact of employing companies who have signed up.

For all the smiles, back slapping and popped champagne corks, it is now back to the real work of ensuring the Code is truly able to deliver its promise to promote best practice while imposing realistic and effective sanctions on those who either do not sign up, or who do not abide by the Code.

Previous ArticleEUNAVFOR Briefing 28/09/10
Next ArticleWhat Does It Mean? The International Code of Conduct for Private Security Contractors

3 Replies to “Signing On: The International Code of Conduct for Private Security Contractors”