Latest from the conference on Somalia’s future in London, where the threats of terrorism and piracy are among the issues being discussed by world leaders. See link at foot of article to access live videostream.

World leaders are attending a major conference on the future of Somalia in London to focus on finding peace and ending threats of terrorism and piracy.

Somalia has endured more than two decades of civil war and famine.

Representatives from many Somali factions are also attending, but not the Islamist group which controls much of the centre and south of the country.

The UK has described Somalia as the “world’s worst failed state” but said it needs a “second chance”. 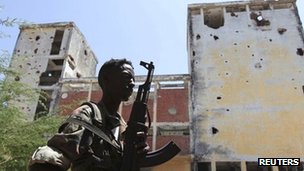 Mr Cameron told the gathered leaders, who included US Secretary of State Hillary Clinton, Nigerian President Goodluck Jonathan, Ethiopian leader Meles Zenawi and UN chief Ban Ki-moon, that the world would pay a high price if it ignored the plight of Somalia.