Piracy off the coast of Somalia has been at the centre of media attention for several years now, however, over the past few months attention has begun to shift to the worsening situation off Africa’s west coast.

The Maritime Security Review spoke with LGS Nigeria to ask if the this shift of focus actually corresponds to a change in piracy and criminal activities in West Africa.

The Growing Threat of Piracy in the Gulf of Guinea

Over the past three weeks the hijackings of as many vessels off the coasts of Nigeria and Togo has focused the media and maritime world’s attention on the Gulf of Guinea.

On 18 August armed pirates boarded and hijacked a tanker while the vessel was lying at anchor off Lome, only ten days later the same fate met the Energy Centurion while in Togolese waters. Then, as if to confirm concerns over the growing threat of piracy to shipping off West Africa, the Abu Dhabi Star was boarded whilst at anchorage off near Nigeria’s commercial capital Lagos on 5 September.

Figures from the ICC International Maritime Bureau’s Piracy Reporting Centre (IMB-PRC) make alarming reading; according to the Centre, there have been forty reported attacks on vessels in the Gulf of Guinea so far this year. 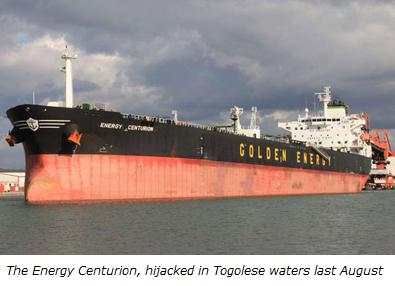 The Centre reports that in nineteen cases vessels were boarded and eight successfully hijacked and their crews kidnapped. Tragically, the attacks have led to two deaths.

On the whole attacks on vessels off the coast of West Africa tend to be characterised by the high degree of violence used against crew members. In fact the IMB-PRC has reported that firearms have been used in more than twenty of the attacks reported so far this year.

The dramatic increase in both attacks and the levels of violence used by the pirate gangs in the Gulf of Guinea has led to insurance costs spiralling. Even before the latest incidents, the London based Lloyd’s Market Association – a specialised body that provides technical support and analysis to the Lloyd’s underwriting community – placed the waters off Nigeria and Benin in the same risk category as those off the Somali coast.

With the attention of the maritime community focused on developments in western Africa, the Maritime Security Review asked James Rogerson, Chief Operating Officer at LGS Nigeria, and Lee Kirton, Head of Global Maritime Operations, to offer some insight into the situation.

MSR: Are the recent incidents off the coasts of Nigeria and Togo symptomatic of a new criminal front opening up in West Africa or is it simply a case of an increase in existing maritime crime?

James Rogerson: It’s certainly not a case of a new front, maritime crime in the region is a well established problem, however, the recent increase in the number of attacks and the levels of violence used by the criminal gangs is certainly a cause for concern.

Have Libertine noted new trends or changes to the overall scenario?

I’d say that the recent incidents do not attest anything in particular as they were carried out in different areas by different groups using different modus operandi for different purposes.

However, that said in the past it’s almost always been a case of violent robbery, now were moving towards a greater focus on kidnapping and hijacking. This is certainly a new trend that is emerging.

Can this change be attributed to anything in particular?

There is not point in speculating as to what any changes might be attributed to, our job is to react to them in such a fashion as to define efficient counter measures and put them into place quickly in order to continue protecting our clients’ interests and their vessels’ crews.

We’ve been operating in Nigeria for almost five years now and in this time we’ve come to recognise that the environment is a particularly difficult one, that said and taking into consideration our experience, we are monitoring developments with particular attention.

What vessels are targeted and why?

First and foremost attacks are generally aimed at stealing a part of a vessel’s cargo and anything else of value onboard. In the more dramatic cases tankers are hijacked, the oil transferred to smaller vessels and then sold illegally in the region. There is a well established market for these sales.

Targets are identified via intelligence gathered in a number of fashions. First of all the fact that vessels leave their AIS turned on makes them easy to locate, information can then be gathered as to the vessel’s specifications and cargoes. At that point more detailed intelligence can be gathered by recognisance aimed at identifying weak and blind spots on the vessels.

What form does the recognisance take and what can be done against it?

Recognisance is carried out in a number of ways, the most obvious is by fishing boats, there are so many that its impossible to distinguish between the legitimate and those used by the criminal gangs.

When ships are lying offshore, in transit, or in the anchorage area it’s very easy for fishing craft to approach them to gather intel.

In terms of countering risks it’s very important for vessels to display deterrents so as to avoid being defined as a soft targets. The vessels need to show that they’ve been hardened and that the various deterrents implemented are efficient.

MSR: Can you tell us about hardening and deterrents?

Lee Kirton: Obviously we cannot say anything specific about the counter measures that we use, however, it is vital that our strategies are layered. Mitigation is the starting point, observation and monitoring assure protection, and non lethal deterrents such as lasers form the basic levels of counterattack.

What we focus on is the progressive use of counter measures beginning with mitigation and then proceeding through a series of levels which finalise in the deployment of armed Navy personnel aboard the vessels that we are tasked to protect.

Our objective is to take the appropriate measures, mitigation, vessel hardening, implementing BMP implementation, monitoring and displaying deterrents so that our armed officers are an absolute last necessity.

In one of the latest hijackings four Nigerian Navy personnel were shot, two of whom were killed. The level of violence is very high and increasing, do you advocate armed security?

As I said, our strategy is mitigation and gradual build up through progressive levels, the last resort is defensive. If, and only if deemed absolutely necessary, will our Nigerian Navy personnel resort to defensive tactics.

In that case they will use appropriate force and dissuasion in line with Host Nation operational procedures.

How do your clients feel about using armed security?

We do all that we can to provide the best service possible, we have multiple expat teams in loco on a permanent basis and we’ve worked hard at establishing excellent working relationships with the local Ministries, Departments and Authorities involved in security. This allows us to deliver clients qualified and reliable solutions.

In an ideal world nobody would have armed security but this is not an ideal world and there are occasions when we have no option. Our clients understand and appreciate this and as long as we continue to be scrupulous in our management of the various levels and phases that make up our security measures, I’m confident that our clients will continue to accept them.

Given the dangers, should crews transiting the region be given particular training?

Training is very important. First of all crews need to be aware of potential dangers so that they can work in harmony with the security teams. No amount of training will prepare you for some of the potential scenarios, however, it can help to avoid them and it can make the experience less dangerous.

If crews know what to expect and act accordingly, the safer the entire crew will be during a hijacking. It’s all very simple in theory but we’re looking at the training of huge numbers of people.

Thank you both for taking the time to speak with MSR

One Reply to “Growing Threat”