MV Maersk Alabama has fallen prey to Somali pirates almost five times over the past two years. On four occasions, buccaneers were prevented from taking the vessel and its crew butin 2009 the vessel’s captain was captured by hijackers.

MV Maersk Alabama is a container ship which was put into operation for the very first time in the year 1998 under the Danish registry and with christened title of Alva Maersk. Later on, the vessel’s name was re-christened to its present name with its registration transferred to the United States of America.

The Maersk Alabama was built in the Taiwanese shipbuilding yard of the China Shipbuilding Conglomerate. The vessel measures almost 510 feet lengthwise with a beam of over 80 feet. Alabama has a gross tonnage of over 14,000 tonnes and a Dead-weight Tonnage (DWT) of over 15,000 tonnes with speeds extending over 18 knots. A crew of 21 members man the vessel while it’s operated in its routine marine voyaging channels

Although an exemplary vessel amongst its class, this Maersk vessel has in the past few years gained extreme notoriety. The vessel plies mainly between the east-African water routes passing through countries like Kenya and the Republic of Djibouti. Though at a first glance, the route seems to be a fairly easy to traverse, the presence of buccaneers and pirates near the water-route of Somalia has added to the threat of international shipping in these geographic parts.

MV Maersk Alabama has fallen prey to these Somali buccaneers for almost five times in the past two years. Though four times, buccaneers have been successfully prevented from taking hostage of the vessel and its crew members, there was a huge risk of life and vessel once in the year 2009, when the vessel’s captain was captured by the hijackers while it was navigating at a distance of about 450 kilometres from the Somali waterline.

In the month of April in the year 2009, in spite of several security protocols and guidelines provided to the MV Alabama about the prevailing danger in and around the Somali waters, there was a breach when a group of four buccaneers entered the Alabama and over-mastered the crew members while also taking the vessel’s captain as surety for ransom.

The Maersk Alabama hijacking became an intense topic of debate and discussion considering that the Alabama was the very first Unites States’ vessel to be held captive by Somali buccaneers. The stand-off between United States and the pirates continued, though the United States navy had already begun rescuing operations by deploying their marine vessel USS Bainbridge.

The rescue operation concluded in an overwhelming success for the US navy as marksmen aboard the Bainbridge successfully shot dead three of the four buccaneers and freed the captive skipper of the MV Maersk Alabama.

Following this pirating act, in the same year in the month of November, yet another hijacking act was thwarted by the alertness of the 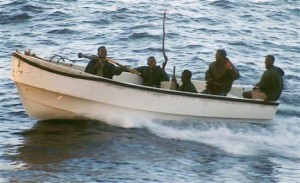 sentries posted aboard the Maersk line ship. Following the attack threat in 2009, yet again an attempt was made to seize the Maersk vessel in the September of 2010, the failure of which prompted two more such – albeit failed – seizing attempts in the months of March and May last year.

Litigation against the Maersk Shipping Line

In the month of April this year, the crew members of the Maersk vessel filed a petition with a county court seeking financial reparation to the piracy act carried out on the ship. The litigators have complained against both the vessel owners – the Moller-Maersk shipping line and its subsidiary Maersk Shipping Company – and the operators. The captain of the ship though isn’t named in the litigation as a causation is also inferred to be a part of the litigators’ demand for financial recompense to the extent of US$ half-a-billion.

Based on the captain’s penning of his harrowing experience as a pirate captive, a movie is scheduled to be in the offing. Reputed and noteworthy actor Tom Hanks is reported to be a part of the movie, directed by yet another stellar Hollywood director of the ‘The Bourne Series’ fame.

Through the cinemascope rendering of the vessel, people across the world can understand what mariners and seafarers passing though the volatile Somali coast undergo. Even though the maritime domain faces such threats on an almost daily basis, it’s perhaps testimony to the professionals’ strength and fortitude that they undertake to carry out necessary marine operations with the least possible fuss.