A Royal Navy ship working in direct support of a Combined Maritime Forces (CMF) operation led by CTF 150 has seized over 450 kilograms of methamphetamine, the largest seizure of its kind in CMF history.

Sailors and Royal Marines on board HMS Montrose, a Royal Navy Type 23 Frigate, captured the drugs from a suspicious vessel during a counter-narcotics operation in the Arabian Sea. 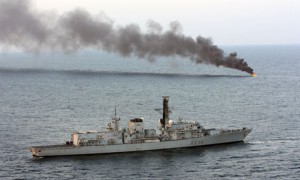 The operation, which was part of CMF’s Combined Task Force (CTF) 150’s Operation Sea Shield, was an international effort involving a number of CMF’s 33 member nations and partners.

“This has been the most successful counter-methamphetamine operation in CMF history,” said Commander of CTF 150, Rear Admiral Sulieman Alfakeeh of the Royal Saudi Naval Forces. “I commend the hard work and team effort of all of our CMF partners, especially CTF 150 and HMS Montrose, who have worked together to make this historic seizure happen.”

The team of UK Royal Navy sailors and Royal Marines conducted the boarding of the suspicious vessel in rough sea conditions, making boarding and conducting searches a difficult task.

The 450 kilograms of drugs were well-hidden on board the vessel and required an extensive and intrusive search by the highly trained boarding team, made even more challenging by the threat of the coronavirus. The ship’s medical team were responsible for de-contaminating all personnel and all equipment, taking two hours for seven people to conduct full COVID cleaning and to process the intercepted drugs.

CTF 150 operates to disrupt and deny criminal and terrorist organizations operating in the Red Sea, Gulf of Aden, Indian Ocean and the Gulf of Oman, to ensure that legitimate commercial shipping can transit the region, free from non-state threats.

CTF 150 is currently led by the Royal Saudi Naval Force, the second time that the country’s Navy has led the task force.

During Operation Sea Shield, the U.S. Navy guided-missile destroyer USS Winston S. Churchill (DDG 81), who was operating under CTF 150, assisted an Iranian-flagged dhow in distress. The crew provided food and water, and remained on scene until the Oman Coast Guard, could render further assistance to the stranded crew.

“The Combined Maritime Forces is founded on a shared commitment to ensuring the safety of all legitimate mariners at sea,” said Commodore Dean Bassett Royal Navy, Deputy Commander of the Combined Maritime Forces. “Sometimes this involves assisting those in distress, and other times it targets those who seek to use the maritime environment to conduct illegal activities such as terrorism, smuggling and piracy,” he added.

“This successful operation is a true testament to the strong partnerships between Combined Maritime Forces members, which is fundamental to maintaining maritime security in such a vast and strategically critical region.”

The Combined Maritime Forces (CMF) is a multinational maritime partnership which exists to counter illicit non-state actors on the high seas, promoting security, stability and prosperity in the Arabian Gulf, Red Sea, Gulf of Aden, Indian Ocean and Gulf of Oman.