East African Fishing, With A Catch. 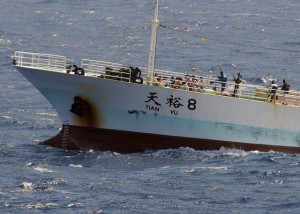 EUNAVFOR recently confirmed that the Kenyan flagged fishing vessel the Golden Wave was hijacked on 9 October 2010, with 43 crew onboard. Considering the International Maritime Bureau’s statistics on the types of vessels attacked over the past two years, fishing vessels are not the most common vessel to be attacked by pirates. In 2009 twelve fishing vessels were recorded to have been attacked globally, as opposed to 109 bulk carriers. Similarly, this year between January and June there were over three times as many attacks on chemical tankers in comparison with fishing vessels.

Whilst the lure of expensive cargoes and a larger potential ransom are likely to be driving a shift towards attacks on chemical tankers in the Gulf of Aden and Indian Ocean, the Spanish fishing trawler Alakrana’s ransom for around four million USD in November 2009 shows that certain fishing vessels remain lucrative targets. Captured fishing vessels have also been utilised as makeshift pirate motherships, with the Win Far 161’s use in an attack on the Maersk Alabama as a key example. In this particular instance however, the vessel’s release was secured with only a relatively small ransom and allegedly after the deaths of some of the crew whilst in captivity.

Despite the low recorded figures, it is highly likely that attacks on fishing vessels are in reality far more numerous. With porous maritime borders, many fishermen and fishing vessels are neither recorded, nor insured and few have contact with regional authorities. As illustrated by their carriage of firearms whilst fishing, there is little doubt that Yemeni and Somali fishermen consider themselves under threat from foreign pirates, or each other. With low freeboards and long periods of time at slow speeds, fishing vessels are highly susceptible to pirate attacks. This vulnerability has led the Spanish fishing fleets operating off the East coast of Africa to lobby their government to place military vessel protection detachments onboard their vessels. Whilst the Spanish Government denied this request, they have permitted the use of private armed teams onboard the Spanish fishing vessels, with the critical and unusual caveat of military oversight of their operations. 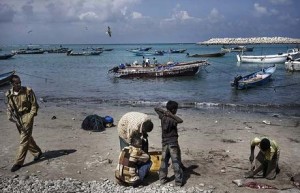 Without functioning control over Somalia’s maritime space and no formal claim to an Economic Exclusion Zone (EEZ), fishing off the Somali coast remains controversial. Externally, most analysts would argue that piracy off the Horn of Africa in 2010 is primarily an economically motivated act and therefore piracy in this region is considered as such. In contrast, political motivations would infer the label of maritime terrorism on these activities. Amongst other indicators, economic motivations and commercial interests behind the pirate business model off East Africa are apparent, especially so when one considers the IMB’s figures on the types of vessels attacked and the locations of their attacks. The vast majority of international vessels are, after guidance, avoiding a 200 nautical mile exclusion zone off the Somali coast, so what could once be considered a fisherman’s citizen arrest and fine have become a pirate’s hijack, kidnap and ransom.

Foreign fishing that is likely to be perceived as illegal by the populace on shore could encourage piracy, and continue to infer legitimacy upon pirate actions. Piracy can also establish income and control structures that become embedded in the absence of local governance.  Whilst the ongoing violent power struggles between militant groups  has the potential to shift the ever-mobile pirates from one safe haven to another, local populace attitudes towards pirate activity can also change. The inflationary impact of large pirate revenues on local economies and the shifting power structures and threats that come with pirate activity can operate as drivers for a change in local perceptions.

Pirates require tacit local acceptance of their activities to operate, therefore initiatives to reduce local acceptance of pirate activity should be considered strongly. For all ship-owners and crews, fishermen or otherwise, the fact remains that their rights to safe navigation of the seas is under the threat of an illegal action under international law and their security concerns need to be addressed. These security problems are far from juxtaposed with those of the Somalian maritime communities.

The establishment of a Somali EEZ and indigenous fishery protection would not only benefit Somali maritime communities, but would pull the local legitimacy rug from underneath the pirates. As we are well aware, local Somali communities are far from powerless and can help reduce pirate activity. Given appropriate incentives, the Somali peoples are a powerful and integral force within an effective counter-piracy strategy on land. However, the longer we permit the pirates to establish themselves, the harder it will become to remove them.

Previous ArticleCitadels Under Siege: Safe Rooms or Safety Hazards?
Next ArticleSailing Through the Pirate Zone

2 Replies to “East African Fishing, With A Catch.”