“When placing crew in a citadel, the crew may not be rescued. You need to consider that fact.”

During an insightful “Combating Piracy Week” conference held by Marseq, the ongoing debate over the utility and use of citadels held repeated attention. With successful employment on the MV Taipan in April and the MV Magellan in September, citadels are far from castles in the sky.  However, their proper use remains contentious. The specific conditions required for the effective use of citadels has forced industry recommendations in BMP3 to advocate that ship operators and masters intending to use them check directly with MSCHOA.

Unlike a safe muster point, a chosen area for maximum protection to the crew during pirate attack but compliance with pirates once onboard, a citadel is designed to protect and deny determined pirate entry and access to the crew over a longer period. This is undertaken along with engine disablement with the primary aim of delaying pirate control of the ship and crew until naval forces can arrive and assist the stricken vessel; watch the re-capture of the MV Taipan on our Youtube Channel.

However, during Marseq’s conference Commander Paget, Director Above Water Battlespace, Canadian Forces Maritime Warfare Centre asserted that “when placing crew in a citadel, the crew may not be rescued. You need to consider that fact.” He asked the audience present to consider the hundreds of pirate attacks and a significant number of naval responses off the coast of Somalia yet there are only three cases of hostile boarding actions undertaken by navies in the area.

Commenting on the recent rescue of the MV Magellan Star, Captain Chambers, Chief of Staff of the Combined Maritime Forces explained that “all the planets aligned for us that day.” Amongst other factors on 10 September, the necessary teams and support were in the area at the right time, there were the necessary communications with the ship master to indicate that all crew were present in the citadel and the military forces were granted the numerous permissions necessary to legally board the vessel. 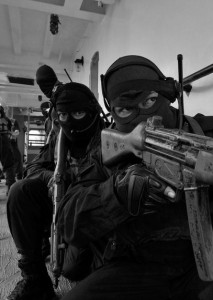 The recapture of vessels is the remit of Special Forces and the boarding team needs to have adequate training in those operations. However, most vessels operating in the Gulf of Aden and Indian Ocean do not have the personnel onboard that have that level of training. Moreover, the boarding team require rules of engagement that are permissive to hostile boarding actions along with the political mandate to undertake the operation in the first place. Freeing crews is not a primary objective for naval forces operating in the region.

The naval officers presenting at ‘Combating Piracy Week’ outlined that first and foremost the safety of crew is paramount, “we are not there to rescue hostages” said Captain Chambers. With the renowned Maersk Alabama as an important exception, it seems apparent that naval forces’ hands are tied in hostage situations and to that end they require communication with the citadel to confirm that all members of the crew are present and none have indeed been taken hostage.

As with the case of the MV Lugela in September, the denial of pirate control of the vessel through engine disablement and citadel use could force them to abandon ship and seek prey elsewhere. However, this aspiration may not always succeed. Informed by the shipping company that the crew were on holiday, the frustrated pirates remained onboard the MV Magellan Star for 20 hours before naval forces arrived and fortunately possessed the necessary requirements to re-capture the vessel. 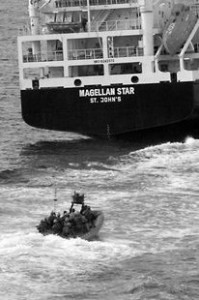 Whilst the IMO have recorded the fire onboard the YASIN C as a “result of rocket-propelled grenades,” others have suggested that after 16 hours, the frustrated pirates set fire to the ship and subsequently left, permitting the crew to exit their citadel and extinguish the fire. Whether the fire was started deliberately or was unintended, the threat to the crew inside the citadel remains. Unfortunately, fixed fire extinguishing systems beyond cargo spaces on merchant vessels are not prevalent; their installation and control from the citadel would be recommended.

Although it took the US Marines 3 hours to cut their way to the crew of the MV Magellan, safe citadel use could  also be threatened by the possibility of pirates attaining cutting tools or firing at the bulkheads. Both of these threats can be reduced significantly through proper citadel design but a potential future acquisition and effective employment of high explosives by pirates may not be thwarted so easily.

As a final point, it is critical to note that whilst BMP3 recommendations include the use of citadels, that guidance is designed for the specific characteristics of the Gulf of Aden and Arabian Sea alone. As Cdr. Paget indicated, “the [naval] response time in the Gulf of Aden is quick but responses in the Indian Ocean may take much longer.” Using Cdr. Paget’s figures, it could take up to 3 days or more for a naval vessel to travel the 1200nm from a position off the Somali coast to the furthest yet pirate attack near the Maldives. Ship operators and masters should take note. Citadel employment in the Indian Ocean may hold greater risks than in the Gulf of Aden but even if you retreat to your citadel there, the cavalry will arrive but rescue may not.

Key Elements of an Effective Citadel

The following list is by no means exhaustive but illustrates many potential needs and some key requirements  for a comprehensive citadel counter-piracy strategy. As commented at Marseq’s conference, media disclosure of exact details of citadel construction, design and location is incredibly detrimental to those in the maritime industry that employ this method. Therefore the following information provides no specifics and has been carefully accumulated from only material that is open source and widely available.

Previous Article“Hull Underwriters Moving Towards BMP Implementation as Part of Contract” – Giles Noakes of BIMCO
Next ArticleEast African Fishing, With A Catch.

One Reply to “Citadels Under Siege: Safe Rooms or Safety Hazards?”