Although far from pertinent to maritime security, the presentation of an astounding example of naval architecture is of interest to all. Besides, who knows what sophisticated security systems have been incorporated into the design.

Despite the presence of an G5 workstation in its publishing office, the Maritime Security Review has as yet to fully defect to Apple. But, as the density of iPhones and iPads per square metre confirms, all at the Review have been won over by the design and functionality of No.1-6 Infinite Loop, Cupertino, California’s products.

We all know Apple co-founder, Steve Jobs, to have been a modest man who wore jeans and lived in a normal house so the unveiling earlier this week in the Dutch port of Aalsmeer of an astoundingly beautiful superyacht designed by Jobs comes as a surprise.

Designed in collaboration with Philippe Starck over a period of six years, the sleek and minimalist superyacht has been described by the French designer as “A boat showing the elegance of intelligence.”

Given Job’s great love of the creations of sub-zero minimalist designer Jonathan Ive, it’s difficult to imagine quite why he chose to work on the project with Starck.

However, Jobs’s yacht Venus, named for the Roman goddess of love and built by the Dutch custom yacht builders Feadship, is a triumph. 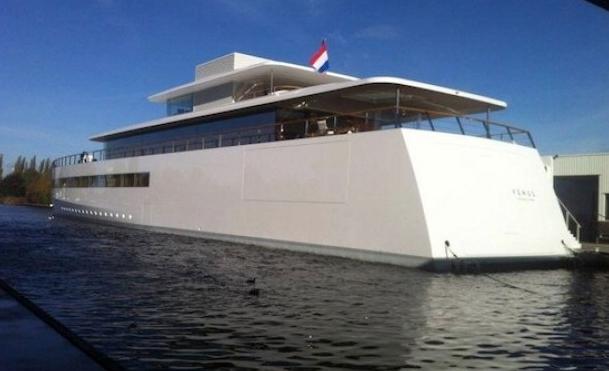 — A one minute video presentation of the yacht can be accessed here: Jacht Steve Jobs te water in Aalsmeer

One Reply to “Venus Unveiled”