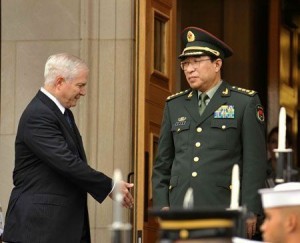 US Defence Secretary Robert Gates has been outlining the Obama Administration’s position on the maritime disputes in the Pacific whilst visiting Vietnam this week. “Relying exclusively on bilateral relationships isn’t enough — we need multilateral institutions in order to confront the most important security challenges in this region,” Gates said. “The U.S. and Vietnam, as well as other nations in the region, also share a common interest in maritime security and freedom of access to the global commons.”

The Chinese have been advocating a series of bilateral negotiations and are opposed towards multilateral initiatives that infringe on territorial waters that they contest. Even more so if an American hand is perceived to be behind any negotiations.

Rejecting China’s bilateral approach does not necessarily mean that the US wholeheartedly supports the multilateral ASEAN initiatives for creating a code of conduct over disputed regional waters. ASEAN-US relations have been positive, but at times have frustrated US efforts to exert a sphere of influence over areas that are considered to be crucial to their national interests.

Gates’ statement serves to benefit US engagement with several ASEAN nations and subsequently puts pressure on the Chinese to work towards a multilateral solution in the Pacific. However, as with Hilary Clinton’s comments back in July,  Gates’ statement may have the opposite effect.

and the AFP article: US Rejects China Stance on Sea Disputes