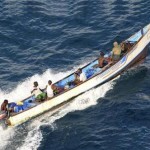 The president cited two reasons for the nation to remain committed and to continue its international obligations in the Gulf of Aden.

“Primarily, we must protect our commercial ships and, under agreements with other countries, the ships sailing under foreign flags. Secondly, it helps our naval personnel to maintain combat readiness,” he added.

Russia joined the international anti-piracy efforts in the area in October 2008, with warships operating on a rotation basis, according to RIA Novosti.