The commanding officer of the Royal Marines unit charged with the dramatic rescue mission to free two dozen sailors from the hijacked Italian ship Montecristo, has given testimony in the bunker courtroom in Rome’s Rebibbia prison during the first piracy trial in Italy in more than a century. Enzo Mangini, Maritime Security Review’s correspondent in Italy, reports.

Dressed in blue and wearing a red tie, Robert William Yap, the 31 year old commanding officer of the Royal Marines unit on board of HMS Fort Victoria in October 2011, enters the bunker courtroom of the Rebibbia prison in Rome.

It’s 10:30 a.m. on a suffocatingly hot summer day in the Italian capital where, during the fourth hearing of the trial against a group of alleged Somali pirates charged with the attempted hijacking of the Italian merchant vessel Montecristo, the British officer is the only witness called to deliver his account of the events.

Answering the Public Prosecutor Francesco Scavo’s questions, Yap recounts the events that unfolded 200 miles off the eastern coast of Somalia in the week between the 10th and 17th October last year.

«On October the 10th I was ordered to board the Italian merchant vessel Montecristo, – Yap said – the vessel had pirates onboard while the crew had taken refuge in the sealed off citadel close to the engine room. Our task was to secure the ship, hold the pirates and set the crew free and safe».

To do this Yap dived his forces into four boarding teams each comprised of 6 Royal Marines. The teams plus Yap himself, a medical officer and a signals expert made a total of 27 soldiers in all.

«From the position we were, we could not tell if the pirates were armed, but the helicopter of HMS Somerset hovering above the Montecristo with two snipers to give us cover told us that the pirates, gathered on the front of the ship, were ready to surrender».

According to Yap the boarding then went smoothly with no resistance whatsoever, the commanding officer told how he and his men handcuffed the pirates and then searched the Montecristo to secure the ship. Only after that did they let the 21 strong crew out of the citadel.

«We did not find any guns on board – the British officer told the court – but we could see the effects of firearms on the doors of the citadel, and we found an empty Rpg charger in one of the cabins used by the crew, plus the clear signs of two Rpgs shots at the main deck. From those signs we made the assumption that the guns and other equipment, especially the hooked ladders used to board the Montecristo, had been thrown into the sea.»

Yap did not see the pirates getting rid of the guns and the ladders, but his assumption was based on previous operations and of the modus operandi of Somali pirates in similar circumstances.

The Marines commander left the Montecristo at sunset leaving a team of his men to guard the pirates, who remained under custody until the arrival of the Italian warship Andrea Doria two days later.

Yap told the Public Prosecutor that «Two or three days later we were told that a ship, possibly used as launching pad for the assault on the Montecristo had been spotted.» It was later identified as a fishing dhow, possibly of Pakistani origin.

Yap stated that the vessel did not stop when verbal warnings were given by HMS Fort Victoria and by a US warship that had joined the operation. Nor did it stop when warning shots were fired in front of the dhow: «We had to board while it was still moving», Yap told the court.

Onboard the dhow, the Royal Marines found two different groups: the original fishing crew, who were standing under the main deck to the front of the ship, and a group of Somalis who had taken to the rear of the dhow and were controlling the engine room and the main deck.

It was there that searching the ship the British soldiers found AK47s and Rpgs «in very good operational conditions». Beside the weapons, the Royal Marines found hooked ladders and life jackets belonging to the Panama flagged merchant vessel Asphalt Venture, previously hijacked by Somali pirates and eventually released after a ransom had been paid.

Again, the British soldiers waited until the Andrea Doria arrived to take the Somali pirates into custody and consign them to the Italian authorities. A long journey that ended in the cells of Rebibbia and Regina Coeli prisons, in Rome. 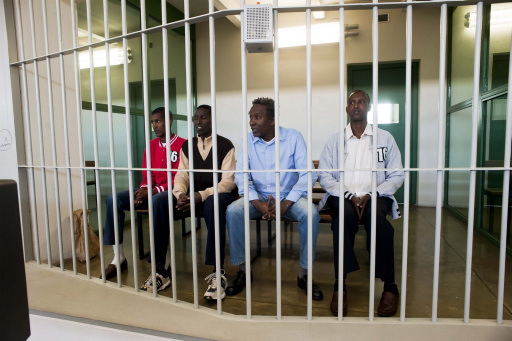 Yap could not say if the persons listening to his testimony from behind the bars of the cages in the bunker courtroom of Rebibbia were the same individuals found onboard of the Montecristo and the fishing dhow. He could not identify any of them but one: Ahmed Mohammed Ali, the only grey-haired men in the group.

«I remember him because when we were onboard of the fishing dhow he passed by me and I noticed that he was the oldest in the group». Ahmed Mohammed Ali had been identified as the possible leader of the group also by Royal Navy Capt. Gerry Northwood in the previous hearing, on June the 27th (See Landmark Trial).

Defense lawyers Douglas Duale and Massimo Mercurelli asked only minor questions while the Court asked if, in his experience, Yap could comment on political concessions that pirates may request in addition to the ransom money they demand after capturing a ship. Yap told the Court that «Sometimes, if they seize an Indian flagged ship, they ask for pirates held in India to be released, otherwise they usually only ask for money to set the crews and ships free.»

The British officer, who left active duty just a few days ago, had been asked a question that was by no means a secondary matter, in fact Public Prosecutor Francesco Scavo has included in his charges that pirate gangs have links to al Shabab and therefore they should also be charged with terrorism.

It is a thesis that so far has proved to be somewhat weak since no clear link – political or financial – has been traced to support it. For those in the cages waiting for the verdict this could make a big difference in terms of the years they may have  to spend in Italian prisons.

The next hearing is scheduled for July the 17th, it is expected that the Commander of the US warship which was also involved in the operation to rescue the Montecristo will participate via a conference call from Florida.

After that, in September, crew members of the Italian merchant vessel will give their testimonies. Scavo is confident that a verdict could be obtained by the end of the year, thus marking the conclusion of the first trial for piracy in Italy in more than a century.

Another trial is due to start in relation to the attempted hijacking of the Italian vessel Valdarno: same prosecutor, same lawyers, but a different scenario – the alleged pirates were not arrested onboard the Italian ship but on the mother ship they used to attack the Valdarno on January the 15th 2012.

Security personnel onboard the vessel managed to repel the attack, thus saving the ship and its crew from the pirates. The accused, once he mother ship had been identified and stopped, were later arrested by a boarding party from the San Marco Regiment embarked on the Italian frigate Grecale.

Photograph of the accused, taken during the first audience, by Stefano Montesi.